& its owners now the Clubhouse of Upton Golf Club since 1937

The Oaks which stands off Upton ( formerly Sandpit) Lane, was built by Mr. Charles Potts - a member on an old established Cheshire family. It is believed that this was the site of Upper Upton Hall which may have been demolished to build the new property. The high boundary wall probably dates from the old days of the Hall. The new building - formerly known as Oak Bank and Upton Bank is understood to have existed in 1859. In late Regency style, it stands on a slight rise and commands a pleasant vista of lawns and trees - providing a summer residence for the Potts family. The Philipson & Golder's Directory of Chester for 1902 records Reginald Potts living at Upton Bank and moving at around that time to The Dale (now the army camp).

From 1904/5 to 1915/6 Wm Richardson Moss is recorded in the directory as living at The Oaks and it appears that he carried out extensive alterations to the house including changing its name when he acquired the property in 1903. Prior to his retirement he had been a successful cotton mill owner in Bolton, having moved there from Co.Dublin where his grandfather Samuel had established several mills in the early 1800s. The Moss family originated in Frodsham where Thomas (1741-1785) was a clockmaker.

Wm Richardson Moss was a keen patron of the arts and having accumulated wealth through the cotton industry loved to spend it on art treasures of any kind. He had a tremendous collection of china, embroidery, pictures and books. He was a friend of the painter George Frederick Watts (1817-1904) and at least one of Watt's paintings 'Olympus on Ida' formed part of his collection. He died 24 Aug 1915 and is buried in Upton churchyard with his second wife Helen Eveline (1851-1909). Although the property no longer houses any of these contents - the downpipes dated 1903 remain and the painted glass lights in the banquet room window have been retained in Upton although the window itself is now a new double glazed unit. This painted window bears the initials of William and his second wife Helen.

Later editions of the directory from 1917-18 record Andrews Crompton B.A. J.P. at The Oaks. He had married to William Richardson Moss's elder daughter Teresa Richardson. It seems likely that she was named after her grandmother Teresa Richardson (1818-1913) who married William Moss M.D. L.R.C.S.I. an eminent Dublin physician.
Andrews Crompton was the first Vice Chairman of the Upton Village Hall and Mrs. Crompton became the first president of the Women's Institute. The Cromptons lived at The Oaks for 15 years prior to the sale in 1931 to G J (Fred) Owen - Clerk to the RDC. It is understood (but not validated) that the Cromptons were victims of the 1930s Depression and the property was sold at a very low price.

The property was later acquired by the Upton-by-Chester Golf Club. (official handbook c.1965) 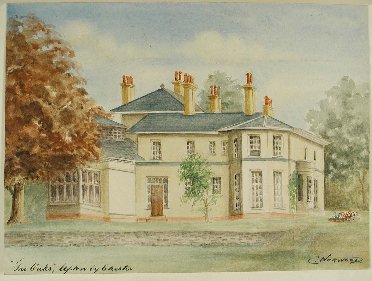 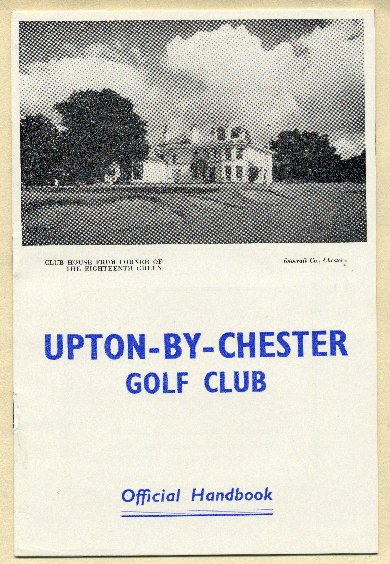 The above text and images draw on research carried out by Michael T Richardson - related to the Richardson Moss family - and to the 1951 and 1965 WI Upton histories.