..the site of the 'Frog' public house 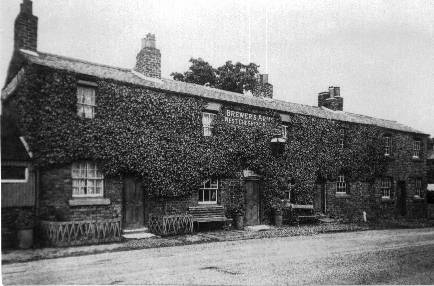 A lease of 28th November, 1835, from Mr. Jones to a Mr. John Gill gives the interesting information that, in consideration of the sum of 5/~ paid by the said John Gill, the land with dwelling house erected thereon, was granted on a lease to him for one year on payment of a rent of one peppercorn at the end of the term. The 1839 Tithe survey records Mr. Jones as the occupier running a public house.

The 1874 & 1880 Directories name the publican as William Hughes but by the 1881 census the publican is named as Ellen Hughes.

The 1881 census places this household under the group of households for Frog Hall . When the name Brewer's Arms was first used has not yet been identified but the WI village history book notes it as 1882. A 1920 conveyance records Potts selling to the West Cheshire Brewery - whether this was the pub or more land around is not clear.

The Frog pub was erected in 1933/34 immediately to the north-east of the old inn.

Of interest are the two stone frogs sitting on either side of the steps at the entrance.

The old inn stood on cobblestones on the Turnpike road, looking across to the manor house, Upton Hall. In the 1890s it was open from 6 a.m. - 10 p.m. week- days, and on Sundays from 12.50 - 2.50 p.m. and 6 p.m.- 10 p.m. If anyone had travelled a distance of over three miles he could demand refreshments at any time of the day on Sunday up to 10 p.m. Beer was 2 ˝ d a pint and cigarettes 6d for twenty. Bread and cheese were available free of charge. About 1900, in so far as Upton Hall and "The Frog" people and the surrounding cottages were concerned, their only means of posting letters was to meet the horse-drawn van about 9.45 p.m. at "The Frog". If no stamps were available, the driver was plied with beer and the letters always reached their destination.

Joe Morris's daughter - Mrs Kathleen Archer - took over the pub and established a reputation for discipline. It was claimed that she trained the staff at Belson. In those days the Frog had a snug and the public bar with bagatelle table.

footnote - Joe's brother Charles who in his early years had run away to New Zealand - returned and later became the keeper of the Roodee.