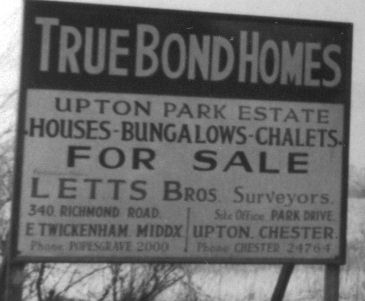 (known initially as the Upton Park estate)
developed from the mid-1950s on former Dickson's Nursery land to the south of Upton Park.

It is understood (until further evidence) that post-WW2 the land bounded by Rosewood Avenue / Upton Park / the Firs / Shepherds Lane / railway line was still possibly in the ownership of Dicksons but had not been productive nursery since the 1920s.(Stanton House - to the west of Upton Park - the former home of the Dicksons - was derelict by the 1930s)

Locals recall greenhouse bases with their derelict low walls still in place during the early 1930s but by the post-war period the area was largely scrub with pathways and some treed areas including neglected orchards.

The Upton Park Estate will ultimately extend to over 400 dwellings, and will form a self-contained community with sites reserved for shopping and recreational facilities including a generously proportioned open space.

At present, the quickest approach is by No:13 bus from Market Square, alighting at Bache Drive, but more convenient bus routes are confidently expected to run through the estate in due course.

The estate did in fact include some ( 2 - 3 acres) land (vacinity of Moorhouse Close) that was originally part of the over-ambitious original plans for Upton Park in the 1850s - but this cul-de-sac off Upton Park's circle was never developed as part of Upton Park and soon passed into the hands of Dickson's nurseries. True Bond had to go to the Land Tribunal in London to acquire release from the Upton Park covenant to enable them to put higher density building on this land. When building development started the use of the name Upton Park Estate led to much increased traffic levels through Upton Park and its residents put pressure on True Bond Homes to drop the use of the name 'Upton Park' in describing their estate.