The Weal Stone (or plague stone) 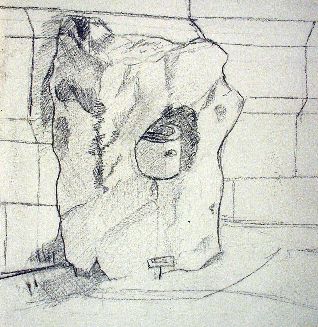 For many years the stone was in the wall at Upton Cross prior to being moved to the church in 1938. Hence Upton Lane was renamed Wealstone Lane. The hollowed bowl had been useful when climbing over the wall.

The original position for the Plague Stone was on the Butter Hill when used for the purposes of a plague stone.

During the earlier years of the sixteenth and seventeenth centuries the neighbourhood of Chester was visited by Plagues which often carried off quickly many inhabitants of the city. Such visitations are recorded in 1507, 1517, 1550, 1574, 1603, 1607, 1647. In 1507 there were 91 deaths in two days. In 1603 and 1604 upward of 1600 inhabitants perished. As such occurrences were happening in other parts of the country. PlagueStones were set up on order that the people might barter for food. People from the afflicted districts came to the district Plague Stone and placed money on the bowl which contained disinfectants and then retired to a safe distance. Food, in exchange, was then placed on the stone.