The Carter/Dean family of Upton Mill Many of them have graves in Upton parish church.

Upton Mill was owned by William Carter in the mid1800s. At this time William Carter was a farmer with local land as well as being a miller and baker.

By the 1891 census, Edward jun (now 26 yrs) and brother Joseph are recorded as having moved into Upton Park. The three youngest children still in the Mill house.

By the 1901 Electoral Roll; Edward Junr is recorded as the owner of Upton Mill. From family records he came into ownership of the Mill on his marriage to Martha Richardson. Edward (Snr) retired to 'The Acres' in Upton and died in 1910 aged 72yrs. Son Joseph had moved with his parents to run the farm. He died 6/7/1914 (presumably not as a war casualty since he is not named on the war memorial.

After Edward (jnr) moved back into the Mill House as the head of household it appears that the rest of Edward's (Snr) children had left Upton Park. Edward (jnr) died young in 1914 at 45yrs - who managed the Mill from that date is not yet known.

Charles and Helen returned later to Upton Park - possibly in the post-WW1 period. It is believed that Charles may have served in WW1 and that the tragedy of his death in the Avenue - 21 Jan 1923 - may have been part of the aftermath of the war. He was found dead with his gun - shot in the head. Helen (Nellie) lived in the Park for a while and then moved away while retaining ownership of some Park properties. There is no further record of son Joseph. 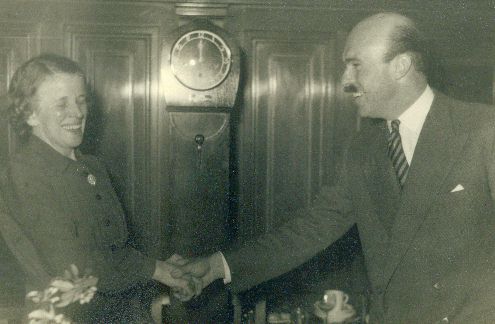 On the occasion of the retirement of Emily Griffiths