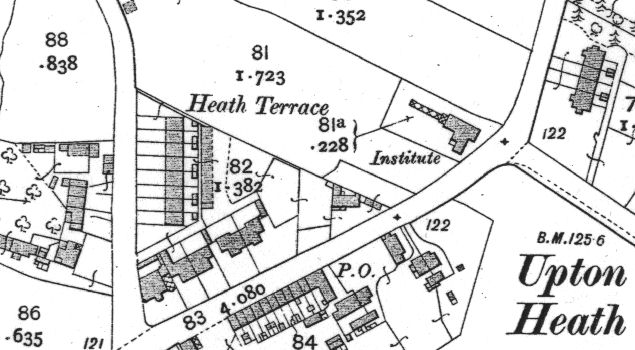 The 1839 Tithe Survey shows the northern part belonging to the Lord of the Manor - Sir Philip Egerton - and described as 'plot 137 - garden' - presumably serving one or more of the properties surrounding the triangle. It is interesting to note that the southern halve of this 1 acre site is not numbered on the Tithe survey and appears to be open ground between the two roads.

In 1860 Sir Philip Egerton sold some 5 acres of land & dwellings in Upton Heath to Mary Brittain. After a few more land exchanges - this particular 5,281 sq. yds (approx 1 acre) was sold in 1903 to builder George Austin. The deed describes land and cottages - but from the 1899 OS map we see that the only property was that in the eastern corner of the plot.

Austin mortgaged the land with Jolliffe & Jolliffe - presumably to fund intended building work. He built The Gables on the corner (southern tip) and it is understood that he made this his home. In 1905 he then built 2 pairs of semis on Heath Road (formerly Main Road) and the set of terraces (Heath Terrace) on Flag Lane.

It appears that Austin retained the land behind the terraces as his builders yard and when the end semi (eastern end) was sold to Mr Davies he also acquired the yard using it for his engineering business. Mr. Davies started the garage business on Long Lane close-by.

The cottages - as featured on the 1839 Tithe Survey - have subsequently been demolished and a 1960s bungalow built.