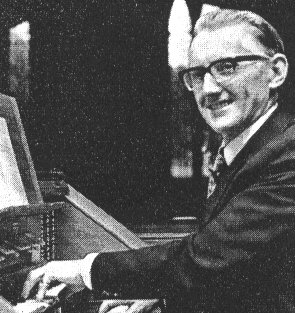 John was born in Hoole and educated, firstly at All Saints School, then in Chester. When he left education he was fortunate enough to find employment with British Rail in Chester. During his time with British Rail he was moved from Chester to Stoke-on-Trent and then to Liverpool, where he spent most of his career.

After learning to play the piano as a child John had organ lessons at Chester Cathedral under the tuition of Rowland Middleton. This led him to become organist at the Welsh Presbyterian Church in St Johns Street, Chester and then Choirmaster at Upton Parish Church. When he was called up for his National Service, John joined the Air Force and while he was stationed in Sudan, he was able to play the organ in Khartoum Cathedral for the services that were held there.

In the early 1950ís John had cause to be admitted into Chester Royal Infirmary, where he met his future wife, Hazel, who was nursing there at the time. Hazel always knew that if John wasnít in his sick bed, when he aught to have been, she would be able to find him ëchattingí to the nurses over a cup of tea in the kitchen area. During the time that they were courting, Hazel went to Edinburgh, for 18 months, to train as a Midwife. On her return she told John she was thinking of going to Hong Kong to do her Queen Alexander Nursing, John was a bit dismayed and said ìItís either Hong Kong or meî, so ìmeî won and they were married in 1954.

John had been choirmaster at Uptonís Holy Ascension Church since 1951 so the then incumbent Rev Wheldon Williams was only too happy to perform the marriage ceremony for them. Following their marriage Hazel moved into Johnís house in Hoole but shortly after they moved to Upton, temporarily initially, but liked it so much they stayed and raised their family here.

During his 40 years as choirmaster at Upton (1951 - 1991) he worked with three different incumbents, Rev Wheldon Williams, Rev Fred Lapham and Rev Glyn Conway. In the early days the choir was men and women only, who met weekly for choir practice and for services on a Sunday. John would say affectionately ìI have a cock and hen choirî, due to the lack of youngsters. Boys were admitted to the choir for the 1st time in 1967, John and Hazelís elder son (Jeremy, born in 1960) was one of the first to enrol and his brother (Anthony, born 1965) joined as soon as he was old enough. All the boys were good at attending choir-practice, with the adults, on a Wednesday evening; at one time there were 16 boys in the group. Saturday morning was recreational time for the boys and a football team was formed and many a good game was played on the Westlea School playing field.

Anthems were sung on most Sundays and at Easter, special music - Stainer Olivet to Calvary or The Crucifixion was rendered; at Christmas, Bethlehem was appreciated by the congregation. Residents of Upton were also able to benefit from the talents of the choir with musical evenings, especially in the autumn, when a Harvest Home was presented. It started in the Village Hall, production manager Mr H Ingham, but after the church hall was built in 1959 Jim Wheldon produced the plays for four years followed by 3 years by Gordon Jones, with John as musical director. These were light hearted and amusing evenings and were happy occasions. His church involvement also extended to the Mother Church of our diocese, the Cathedral, where he was chairman of the events committee, as part of the Cathedral appeal.

The field of education was important to John and he was on the governing body of the Upton schools. He was Chairman of Governors of Upton Manor School (now Upton Heath) and Upton High School, as well as being a governor of Chester College for a period of 10 years.

He served the local community as a Parish Councillor for Upton and was elected to Chester City Council for a period of 13 years (1973 - 86) during which time he became Sheriff of Chester (1978 - 9).

John retired from his career with British Rail in 1985, but continued with his many activities. Magistrate for 29 years, Chairman for 5 years (1987 - 82); also serving with the Police Authority and Chester Police Forum. A member of the Health Authority for seven years ñ serving as Chairman for five of those. He was on the board of the Chester Mystery Plays, which are produced every five years in the city, as chairman from its formation in 1985 until his death.

John enjoyed people and his connections and friendship of the members of the Chester Pitt Club, City Club, Merchants and Wealstone Lodge, and Rotary Club - President 1996 - 7 for which he received the Paul Harris Fellowship, the highest honour Rotary can bestow.

Although Hazel never managed to get John into the kitchen, cooking up exotic meals, he would gladly help her in the garden and they thoroughly enjoyed their 2 or 3 holidays each year. John was a keen Chester football supporter, in earlier days with Wheldon Williams and later with his sons.

In the 1995 New Years Honours List, John was awarded the O.B.E. for services to the community.