Joyce taught many of Upton's residents and/or their children over the years. After training at St.Katherine's College Liverpool she taught first at Upton St.Mary's infants and then onto Upton Manor when it opened in 1952. She first hit the headlines getting the school involved in the popular I-Spy of the 1960s. Her success led to a meeting with Chief I-Spy.

Her love and enthusiasm for music permeated the school and in 1978 her choir won the BBC TV NorthWest 'A Good Sing' Junior section. 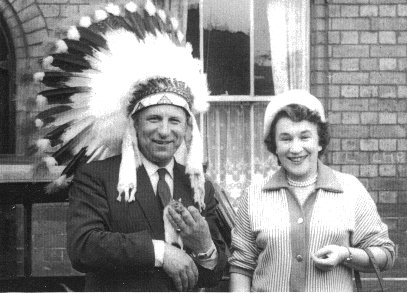 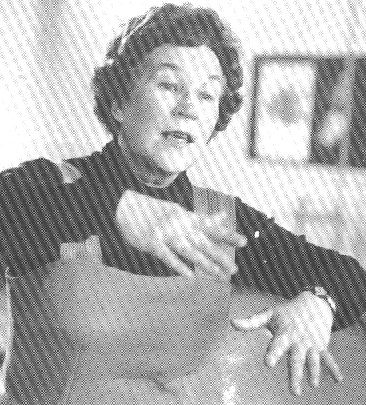 See Joyce's reminiscences in her own words as noted in August 2003.

Deputy headmistress Miss Joyce Cook is due to retire at Christmas after teaching for 34 years. She spoke to Jayne Sheridan about her love of music, and her hobby – genealogy.

Every once in a while, someone quite irreplaceable leaves teaching. Miss Joyce Cook, deputy Headmistress at Upton Manor Middle School, who retires this Christmas is one such person. She is taking early retirement to make way for another younger teacher, and because education economies mean she is no longer able to teach music in the way she has made so uniquely her own during 34 years in education.

Until two years ago Miss cook had the time to do music throughout the school – at the moment she teaches a class full-time. Under her guidance Upton Manor Choir won the junior section in BBC 1’s ‘A Good Sing’ in 1978 . Every year they took part in the Bromborough Festival. Looking back again to 1978, 160 pupils played descant recorders, 14 tenor recorders, 30 played guitars – another 30 had private piano lessons, 16 learned the violin, six the ‘cello and one the clarinet.

‘It is hoped that on leaving the junior school the children will have a wide and varied repertoire of songs and dances the ability to red and perform music, however elementary this may be, a knowledge and appreciation of some of the works of the great composers and above all a lasting interest in the vital subject.’

These are Miss Cook’s ideals, now not too readily achieved, but ones which have informed generations of local children.

However, education’s loss is the Family History Society’s gain, and Miss Cook has so many interests to explore she will be able to make full use of every minute she has after Christmas.

At training college she had to choose between needlework and music. She knew she was useless at the first and after a few short music sessions one of her lecturers asked, ‘Do you come from a musical family?’ At this stage she didn’t know she did – and all is still being revealed. The enthusiasm Miss Cook’s pupils have come to expect is tied up in the dynamic style and contact of her own words which can’t be improved on to describe the excitement of her adventures into her own family history.

This extract is taken from ‘The Musical Branch’ of the Sturge Family.

‘A few years ago whilst spring cleaning my attic I came across two mysterious looking rolls wrapped in yellowing newspaper. Once the dust and cobwebs had been brushed away these revealed themselves to be long forgotten ‘Family Trees’ Who had owned them? Who had made them? – and the immediate problem – what was I going to do with them? ‘Get them framed! Advised friends, and this seemed a sensible idea because they refused to lie flat.

‘It was after their return from the picture framer’s that I really began to study my new treasures. Yes, the trees were connected with my family because there was my surname at the bottom, and all the place names seemed to be connected with Bristol, home of my parents. The larger of the trees consisted of concentric circles, hundreds of names and the title’ The Sturge Family – made by Walter Sturge 1851. The smaller tree provided not only names and dated, but some fascinating comments: ‘ a son who carried coals to Bristol, noted for his great strength’ ‘a daughter who lived at Frenchay Meeting House’, author of ‘Strength in Weakness’ and many more. Meeting House? Surely that suggested Friends, or Quakers. A copy of ‘The Guardian’ lay near at hand. Quaker Information Service announced an advert. I picked up my pen. My new hobby, genealogy, had started! ‘I received wonderful help from the staff at the Society of Friends headquarters at Euston. It was obvious that many members of the Sturge family had been prominent Quakers. But why had my direct ancestors left Friends? Perhaps they had been too fond of music. After moving from Frenchay, great- great-great grandfather Henry Sturge made and repaired musical instruments at his shop in Marlborough Street, Bristol. As a result of looking into her family tree Miss Cook organised a get-together this July. The only rather sad thing was that there wasn’t a Sturge violin to play. ‘We put a notice in the columns of the Telegraph and while I was on holiday in Norway this year friends spotted one in an antique shop in Bideford’ She received it this October and says ‘It’s in very good condition with Henry Sturge, violin maker, Huddersfield anno 1846 inscribed on it. She is setting off on the trail to find why he moved from Bristol to Huddersfield, and when she has some more time she will learn to play – adding the violin to the piano, guitar, recorder and accordion which she already plays.