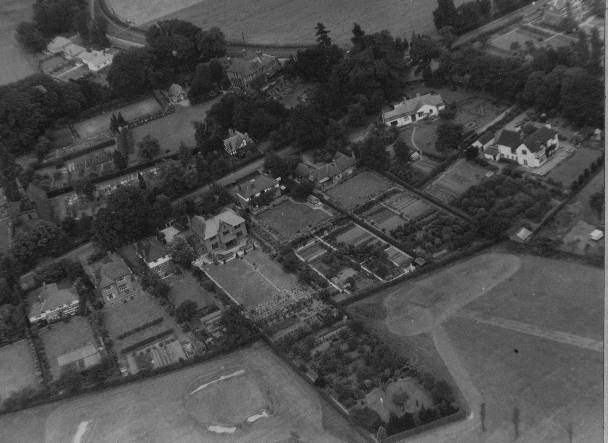 This land bordered by Mill Lane and Church Lane was part of the Upton Trust established by Charles Potts in 1871. In 1925 John Glendale Lightfoot acquired from the Trust executors - two parts of a field called Cross Croft totalling nearly 5000sq yds (central right of aerial view).

Lightfoot - a grocer - was living at The Gables at the time had Glendales built in grounds that extended to c8500sqyds (having sold some and bought more).

Lightfoot then sold Glendales and its grounds in 1947 but it was not until the mid1950s that some of the ground was sold for further properties. Glendales then became the home of Dr Benjamin Carr - who moved there from The Gables.

In May 1934 Charles James Frederick Owen (understood to have been a senior local Council official) bought over 57 acres of land - largely what is now known as the Golf Club and the peripheral houses. With this purchase he acquired the rights of the Trust. Roadside peripheral house building then started. The other properties - as shown in this aerial photo - stretching along the south side of Church Lane are shown on the 1936 OS