The marl pits around the Upton area

Marlpits have been a feature of the Upton area for well over 800 years. They have played an important role in helping to provide for the basic requirements of life in UptonÆs past to the provision of both educational and leisure time facilities in the Upton of today. The ōglacial driftö left behind by the Ice Age of ten thousand years ago created swathes of sand and marl (soft concentrations of secondary calcium carbonate) along the contour lines of the slopes left by the retreating ice. One such slope runs along Chester ZooÆs northern boundary in an area known to geologists as ōThe Deva Spillwayö. It had been known, probably, since Roman times that spreading clay over sandy soils enriched the soil and improved itÆs water holding capacity. This practice known as ōmarlingö was commonplace in the Upton area. The marl was common at depths of 1 to 2 metres and had to be dug out of the ground ¢ creating marl pits. 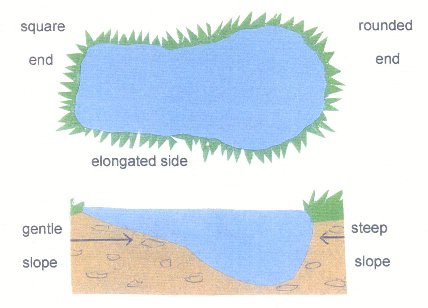 The marl pits, very different from sand and brick pits, are easily distinguishable by the square edged gentle slope at one end of the pit and a steep rounded slope at the other. The shape was the result of a few hundredweights of marl being dug out and loaded into carts which were then hauled up the sloping end of the pit, a process that was repeated time and time again. Over twelve months the pit would partly fill with water so another pit was dug a few yards away. This process repeated over and over again led to the Upton area being dotted with marl pits. Later marl pits were often dug in the middle of fields to make the spreading of the marl an easier matter with another pit close by and even a third. Over the years some marl pits appear to have become joined together making an even larger area of water. As seepage of water out of a marl pit takes place very very slowly surface water is sufficient to keep it full. As a result Marl pits survive for many many years

History of Marl Pits in Upton In compiling the Domesday Book William I wanted every source of revenue, including ponds, to be recorded. A fishery - ōuna piscaraö, for example, was listed at Stanney, but none at Upton. As the recording process in the compilation of the Domesday Book was both thorough and strict it is safe to assume that any ponds now existing in the Upton area were formed after the eleventh century and are likely to be man made and not a result of ancient land and water movement. In 1093 the Norman Earl, Hugh Lupus, bequeathed his manorial rights of Upton to Chester Abbey. One result of this bequest was that Upton as the area started to benefit from the monkÆs superior farming practices. There is documented evidence that the Abbot of Chester encouraged scores of marlpits to be dug and the marl extracted used to enrich the impoverished soil. During the thirteenth century leases contained the provision for marl pits to be dug on both cultivated and waste ground in Upton and the practice of ōmarlingö helped the progress of agriculture in the area. Documentation reveals that ōmarlingö continued in general use throughout the 16th, 17th & 18th centuries, through an era of advances in agriculture such as the enclosure of land, the introduction of new crops like peas and the rotation of crops. It was found that fields left fallow (to help restore their fertility) were unproductive for a season but ōmarlingö helped to overcome the problem. The marl remained effective for about twelve years before sinking. The value of dung as a fertilizer was well known, however as much of the winter stock were killed off each autumn it was difficult to accumulate sufficient dung as fertilizer.

Over the years ōmarlingö became a part of the local way of life. It was hard work carried out by a group of five or six men under a leader known as ōThe Lord of the Pitö. The work usually lasted a fortnight and when it was finished for the year there was much merry making in the village. Stimulated by the increase in food prices for food crops in the 1790Æs many marl pits were dug but by the mid nineteenth century the practice of ōmarlingö was dying out. Even though marl was available and free it needed a great deal of labour for excavation, haulage and spreading. Labour for such tasks was now in short supply as many of the younger and more adventurous villagers had begun to seek their fame and fortune overseas in the colonies or in the growing manufacturing industries. As a result the practice of ōmarlingö became expensive costing about Ż5 an acre It was also a time when alternative fertilizers such as lime, bone dust, sea sludge, soda and salt began arriving in the Upton by canal and the improving road network. The improving methods of agriculture was seeing the growing of fodder to enable the over wintering of more stock. This practice provided an all year round source for the best enrichment of soil ¢ natural manure.

The practice of ōmarlingö may have ceased but the ponds it left behind remained a valuable asset on the farms. The ponds provided a source of drinking water for the increasing herds of cows as the arable land in the Upton area gradually changed to meadows as a result of the move to Dairy Farming.

Today the Upton Angling Club ( with 500 members) fishes in the marl pits to be found, for example, off Acres Lane, the Wervin Road, Duttons Lane and the Zoo Park & Ride Roundabout. They have improved angling facilities by cutting back weeds, enlarging the ponds and restoring water levels by drainage modifications. The ponds have been stocked with fish such as Gudgeon and Tench which are natural pond fish. The old marl pits within the boundary of the Chester Zoo are an imaginative and integral part of the Zoo itself.