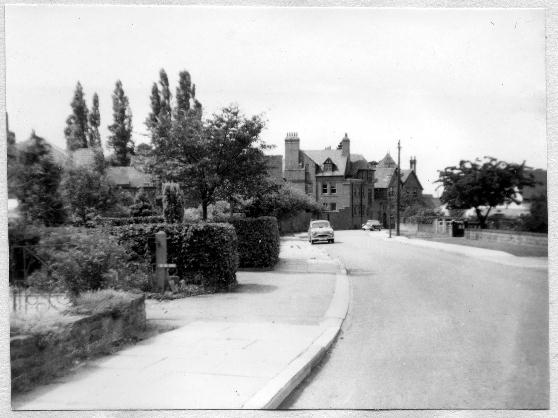 Upton Grange appears to have been built in the early 1900s on the site of one of central Upton's main farmhouses - Upton Green - presumably after its demise as a farm.

text from the WI1965 History of Upton

As the word 'Grange'; implies, this house was once a farm. The middle part of Upton Grange was built first, about 1830; and the two wings were added later at different times. There is a secret room, a very small one, between the dining room and study, whose door is opened by treading on a knob in the dining room floor. The dining room and study are panelled in three different kinds of wood; this panelling was made by the Upton villagers. The tower was only built to hide a water tank. The lodge, behind which are stables and garages, has been converted into two cottages. For a number of years the family of our Member of Parliament for Chester, Mr. Basil Nield, lived at Upton Grange. Prior to this it was the home of Sir H. Robertson. During the war years it was the headquarters of the National Fire Service for this area. It was then the headquarters of the Forestry Commission for the North-West of England from February 1947 until June 1965. From then on demolision was on the cards.

Grangeside was built in the mid1960s with some later in-filling.

Neild Court was built in the 1970s???? after the demolision of the two old properties