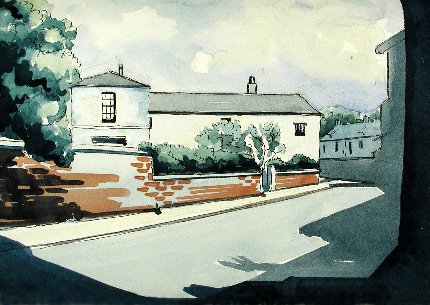 pictured here as a drawing in the 1951 WI Village History

The early days as a small-holding
It is understood that this building started out as a two room small-holding built early in the 1700s. It had inglenook fireplaces at each end and a central entrance door facing West. There might well have been a wooden ladder up into loft space (the roof line being lower than it is today).Shortly after another room of similar size (approx 20' X 18') was added at right angles to one side of the northern end (hidden behind trees in the left of the drawing). When renovations were carried out in the early 1990s the end west wall of this room still had an oak lentel beam running almost the full width of this wall - suggesting it may have been a barn for animal food storage and/or cart/buggy storage.
The 1839 Tithe map shows it still as an L-shaped building before the familiar farmhouse-style quadrangle was built.

From unearthed records it appears that Mrs. Ann Davies owned the property in the late 1700s leaving it to her nephew Thomas Amery on her death c1808. Thomas Amery of Pool Hall owned around 45 acres in Upton but mainly farmed the area to the north - Moston & Caughall. The 1839 tithe apportionment names Wm. Cardwell as occupying the property but no occupation is known.

Extension into a farm quadrangle serving a significant sized farm

Some evidence suggests that the quadrangle providing storage for farm animals and/or equipment may have been added c1842. A set of initials along with the date '1842' have been discovered by the current owners - scratched into the rough plaster upstairs in the stable block. It is likely that the house was upgraded too at this point - with the roof raised by some 6 - 8 courses. Evidence also suggests that the farmhouse opposite (Upton Green) may have declined around this point as Upton Lawns was built and/or as it was acquired for conversion into more of a 'gentleman's country residence'than as farm buiuldings.

It is possible therefore that the farmhouse may have effectively 'crossed the road'.

Its varied use in the 20th century

By the 1920s the property was owned by the Bricklands and operated as a pig farm. The 1951 WI Village History records villagers memories of it as a pig farm in the 1930s. In the early 1990s - Mr Brickland reflected on his days there as a child while at least two parts of the Brickland family lived there. He recalled looking out onto the Lane from his bedroom window over the old dairy. In the 1951 WI Village History - older Villagers recalled buying dairy products through the window hatch onto the road. Mr Brickland recalled the drunks passing by under his window - returning from the Wheatsheaf.

A Mr. Price - thought to have been a Liverpool taxi driver - had the property later on. He apparently ran a business killing animals and selling their products from the farm.

After WW2 the property and some adjoining land was owned by Mr Shinn - a speculative builder who built and/or sold plots around Upton Lane but also including the Pen folds. His son Arthur Shinn later lived there with his wife Violet before they sold the property to the current owner in 1990. The house has now had significant renovation with much care going into the retention of period features. The cellars are claimed to be barrel vaulted but were filled with sand by Arthur Shinn.

When Upton Lane was widened the end of the building was demolished and the garden wall built.