Croft Field - of nearly 4 acres - had passed from Lord of the Manor ownership prior to 1735 when it was part of the Nicholls farm covering much of central Upton. By 1801 it was farmed by a member of the Hesketh family and by 1839 tithe surveyit was one of the few fields actually owned by the main Upton farmers - the Ithells. In the 1840s it was sold for the house and grounds of Upton Lodge.

The house is believed to have been built around 1848 (the 1848 date displayed on the cottage and former stables) - although the 3-storey house may have just preceded the cottage and outbuildings. One of the first occupants may have been Mr. Tilston - a cheese maker (factor) and James Dickson is believed to have lived there in 1874 possibly in retirement. The 1881 census records it being the home of Captain Henry Hall (aged 35yrs) of the 22nd Reg the Cheshires - living there with his family. 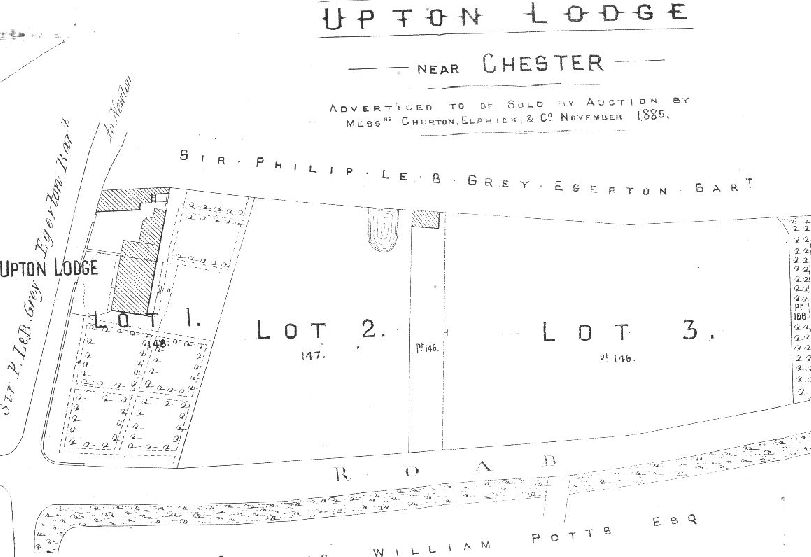 On 7th November 1885 the house with its out-offices, stabling, coach house and grounds were auctioned as three lots - Lot 1 being the house and gardens with two fields Lot 2 and Lot 3 being potential building land. However it appears that all three lots went to a single purchaser - the estate staying in tact - purchased by John L Kemp (b1852 in Glasgow) on behalf of his wife Beatrice. John was the son of a Glasgow silk merchant. He became a brewer and moved to Chester where he worked with or potentially bought into the Northgate Brewery. His wife Beatrice moved with him and they had three children in Upton. John L Kemp died in 1901 (cause unknown) when he was only 49. The house was then subsequently sold. (this information on the Kemps provided by descendent Yolanda Wilcock)

Mr. T. A. Beckett then bought the house and grounds. He later raised some finances by selling some land adjacent to the Mill to the Mill owners and then sold the house and remaining ground in 1927 to the War Department.

The War Department also acquired Dorincourt - renaming it 'Government House' and Upton Lodge was used as part of that War department complex. While Gen Jackson occupied Government House; the Lodge was used as residence for the Chauffeur and Dispatch Rider (and possibly other military staff) - but was mainly the offices as used by Jackson's ADC. It seems that after the outbreak of war it became the official residence of the Major General Chief of Staff Western Command. In the late 1940s the occupant was Major General G.H. Elliott C.B.,C.B.E., D.S.O.,M.C. Post-war GOC's apparently included Gen. Horrocks and Gen. Templer.

In the 1960s or 70s the whole was acquired from the War Department by the Rural District Council who initially rented out the house and subsequently planned to use the property as an 'Old Peoples Home'. This failed to get planning permission on the grounds of poor traffic access and the incumbent tenants - Dr. J Charles-Jones and family were able to buy the property - house and outbuildings. The gardens to the side - in the corner of the Mill Lane / Wealstone Lane junction - was retained by the RDC as a public amenity - later being the responsibility of the City Council. The RDC also retained the grounds - towards the Mill - subsequently building the Dorin Park school. 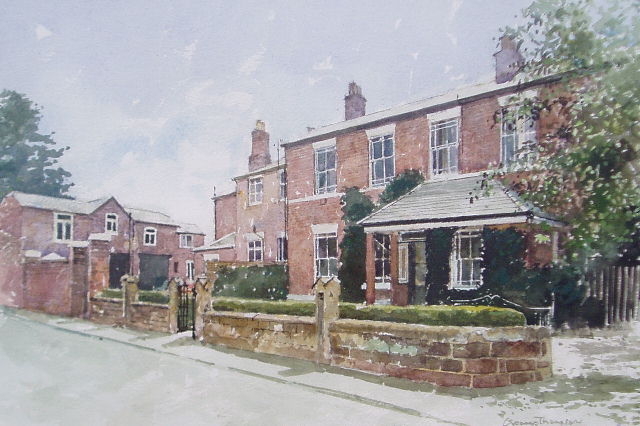 At this time Drs. Charles-Jones were encouraged by the Parish Council - under the Chairmanship of Shiela Garston - to start a much needed General Practice Surgery within the fast expanding community of Upton. The practice was started on 1st January 1979 - some temporary buildings eventually being built when demand outgrew the surgery initially located in the former servant's quarters.

The practice continued at Upton Lodge until once again demand outgrew the facility and in 1990 a New Surgery complex (Upton Village Surgery) was built where it now stands behind Upton Library. Drs. Charles-Jones retired in the mid-1990s. In 1995 the ex-Surgery wing of Upton Lodge was demolished to allow access for the new development of two modern houses in Lodge Gardens. The original stable block and gardener's cottage was refurbished and retained the name 'Lodge Cottage'.
The external appearance of the main house has not changed very much - the porch was replaced post-1930 with a new front door and entrance vestibule. The front railings and gate are a recent addition - the former ones having been lost as part of the national war effort collection of such artifacts.

The illustration is from a 1994 painting by George Thompson - reproduced here by courtesy of Dr. John Charles-Jones.