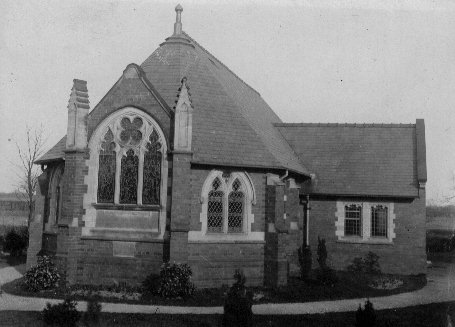 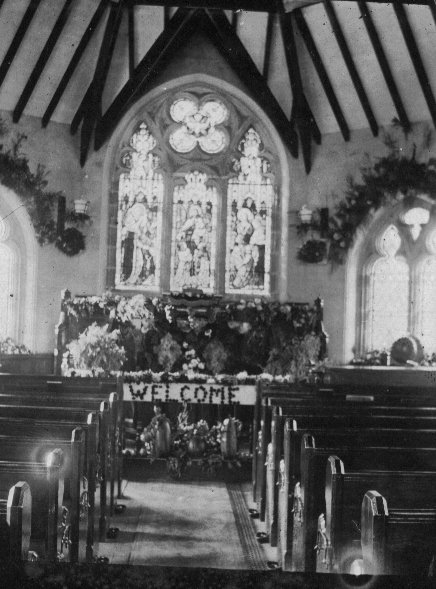 The Congregational Church in Upton Heath came into being from a very simple and humble beginning almost a century ago. In 1858 six young men from Queen Street Congregational Church began to hold open-air religious meetings in the wheelwright's yard where the Wheatsheaf Inn now stands. The interest in these gatherings increased, and the group of worshippers, which included the owner himself, began to use the wheelwright's shop for their meeting place. As the congregations increased the County Union resolved to build a chapel at Upton, and in 1860 the first Congregational Church building was completed and opened, and a Sunday school was formed. But, as the years went by, this first building, which is now the village newspaper shop, became too small and inconvenient for the growing population. So plans were made and funds raised, and in June 1900 the foundation stone was laid for the new Congregational Church which we now know, situated near the site of the original meeting-place. The present building is of Gothic design; it is faced with Ruabon bricks, with stone dressing to the windows, and it provides accommodation for about three hundred people. In the interior a screen separates the chapel from the schoolroom. The three sanctuary windows on the west side of the church are memorial windows executed in stained glass. The centre window, showing Christ blessing the little children, is in memory of Mr. William Bradley; the window on the right, showing Christ as the Hope of the World, is a memorial to Mr. Sidney Clark, given by his wife; and the window on the left, showing Christ as the Light of the World, is in memory of Mr. William Pearson. The cost of this building was Ł1,500, some of which was given by Queen Street Church, and some by subscribers of Upton. The opening ceremony was conducted by the Minister of the Mother Church in Queen Street, Chester, the Rev. D. Wynne Evans, and the stone-laying was performed by Mrs. Mary Clark of London, and Mrs. Sidney Clark of Upton, who, with her husband, Mr. S. J. W. Clarke, had always taken a great interest in the Upton Chapel. After this a number of people laid bricks and. contributed towards the building. Until 1946 the Church was affiliated with Queen Street Church. There was no resident minister in the Upton Church until the beginning of 1947, when the Rev. E. F. Gurney was appointed. He remained here until 1949 and, after a short interval, his place was taken by the present minister, the Rev.D. D. Robertson. Now, in 1951, the Upton Congregational Church looks ahead into the future and feels again the need to expand. There is a building fund in existence, and it is hoped soon to be able to erect a separate building consisting of a hall and class rooms in the field adjoining the church, where the Sunday school and all youth activities can be accommodated. Then the whole of the church building can be used for the purposes of worship. (Extract from the Upton Heath Women’s Institute Village History Scrapbook compiled in 1951.

Photos of the church and of Rev Wynne Evans to follow.)