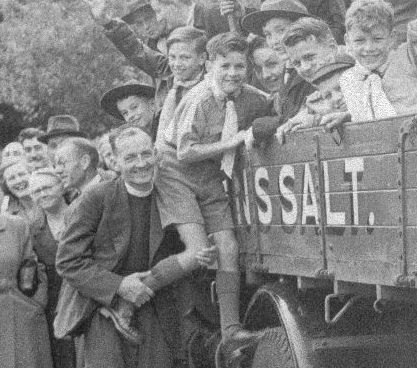 Rev. Canon J Wheldon Williams, Hon. Canon of Chester Cathedral, Rural Dean of Chester and Vicar of Upton from 1947-1969. Following the 2nd World War, a period of rapid expansion occurred in Upton and the population increased enormously. The opportunity for the Church to be at the centre of the new community presented itself, and with it came the ideal leader ľ indeed, as quoted in The Story of the Church of the Holy Ascension, Upton-by-Chester by Jim Wheldon 1987, ôcometh the hour, cometh the man.ö He arrived with his wife Mary, a much loved member of the parish for so many years, and two little daughters, and they were soon established happily at the centre of things.

The Vicar took part with zest in all the parish activities. He gave the impression of thoroughly enjoying what he was involved in and in this way drew his parishioners together into a thriving church ôfamily.ö He could be seen driving in Chester, catching sight of a member of his flock and waving happily regardless of other traffic! Nothing seemed to disconcert him, even the swallow that attended Evensong and swooped perilously over the pulpit during the sermon; or the time New Year was rung in by a member of the choir whose surplice became entangled with the bell rope so the bell gave a resounding ôpingö rather than its cracked but fuller note.

The spiritual life of the church thrived throughout Wheldon Williamsĺ ministry and the building became too small for the congregations, especially at festival times when it was not uncommon to have an overflow. This came to a head at the centenary celebrations when a large marquee was required to accommodate everyone and the many activities planned. As a result, first the Church Hall and then the transepts were built. The windows in the south transept are his memorial. Wheldon Williams established a menĺs group which met, among other places, at the Menĺs Institute, now Guide Headquarters, and indeed he was instrumental in helping the Guides to achieve their own meeting place after years at St Maryĺs School. He revived the traditional involvement of the Vicar with the Upton Dramatic Society and his and his wifeĺs presence at the annual dinner was a delight. He always encouraged young people and supported their activities. The Church choir was enabled to play tennis at Upton Cross by kind permission of (I think) the Stobart family, thanks to his good offices.

In 1948, The Vicar became a Territorial Army Chaplain and was appointed Officiating Chaplain to the forces for duty at The Dale Camp in 1949, thus cementing the parish connection with The Dale. He was always ready to help out in other areas and other churches and denominations and ôvolunteeredö his Readers from time to time as well. He was instrumental in forming the Chester Council of Churches. He had a phenomenal knowledge of the newly developing areas in the parish and was able at times, even to help the postman or others seeking out a new resident.

His love of his native Wales led him to relax in the remoter places. He especially enjoyed fishing and it was there that his life ended suddenly and unexpectedly. Despite the fact that he must often have been in great pain from progressively developing arthritis, as Jim Wheldon says ôhe never allowed it to interfere with his single-minded devotion to his Lord, his Church and his parishö.

He has left a legacy that survives to this day.