land part of the zoo since late 1950s

Demage Farm did not exist in the agricultural village days of the 1800s. In 1839 the Tithe map records only two cottages - although it is understood that Demage Hall had existed previously. (The colouring - red - on the WI History map does not tally with the authoritative tithe map). The fields were farmed by tenant farmers based in other farm buildings.

It appears that the farm came about after land to the north of the village was acquired by Benjamin C Roberts to build the Oakfield estate. With farm buildings built around the two cottages, Roberts appointed a Farm Bailiff (or Manager) to farm the fields adjoining his residential manorhouse.

Before the opening of the A41 By-pass Road, the only approach was through Demage Lane, formerly a narrow trackway with deep ditches on either side. Stories relate that often the miller's carts would slip into these and on occasions had been known to stay there all night.

According to the 1951 WI History book - the wooden shippon which was built from parts of an old ship, purchased from Liverpool by Mr. T. A. Rigby . More farm buildings were added over the years - some being in brick. In the 1920s it was mainly a pig farm but by the early 1930s all the pigs had to be put down due to decease - they were mass buried in a field that became known as the 'pig field'.

After this event Fred Harold Davies took on the tenancy of the farm and eventually was able to procure the farm from BCRoberts. Fred and his family moved into Woodville - which had previously been the laundry to Oakfield. Now as a mixed farm it included dairy and for a period operated a milk round -
the bottles embossed 'FHDavies - from the cow to you'.

The photo shows young Nancy Davies outside the stables and tackroom. 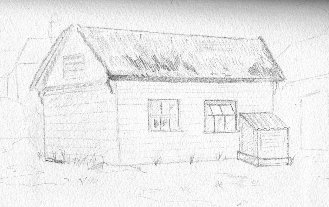 The old dairy - which in 1951 was the last known remnant of thatch in Upton - and falling into disrepair as there was no local thatcher. It is now demolished but in its latter days of the early 1950s the dairy contained the most modern of milk-cooling appliances.

Fred Davies died in 1955 and shortly after Demage Farm buildings and the farm land was sold to the zoo to enable them to expand.