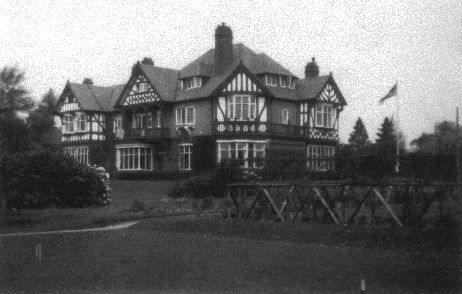 The following is mainly drawn from the WI1965 Upton history

In 1902 there was a sale of land in Newton Lane (now Wealstone) from Sir Philip H. B. Grey-Egerton to Mr. S. J. W. Clerk, clothier, on which he was to build a house, which was known either as Ravenscourt or Dorrincourt. It was built in the ornamental style of the late nineteenth century.

During the Great War the Flying Corp took over the house and then in 1920 the house and grounds were purchased by the War Department from Lieut. Colonel Gossage.

Since November 1920, it has been occupied by a long list of G.O.Cs.
Gen Jackson was in residence pre-WW2 - retiring on the outbreak of war. He was succeeded by Lt. Gen. Sir Brian G. Horrocks,K.B.S., C.B., D.S.O., M.C.who was there until 1948 when he left for the new Government House at Eccleston Hill Hall.

Government House, now known to the Army as Old Government House, was converted into three flats for officers. Despite being remembered as a beautiful house with oak panels and sweeping staircase - it was demolished c1970 and the present Dorin Court was built.

The following is from reminiscences of Mrs Lilian Edmunds (nee Halford) - Jackson's kitchen maid from 1937 - 39. 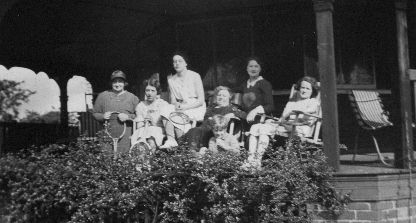 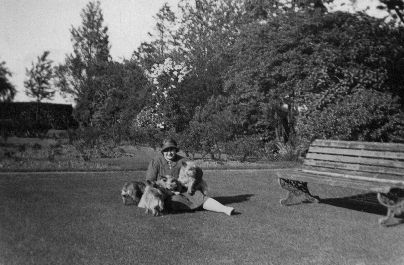 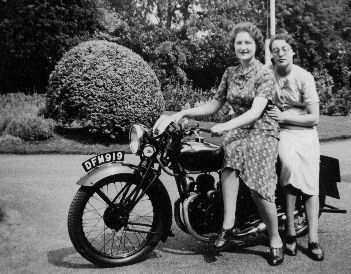 The staff of General and Lady Jackson lived on the premises and for a month every summer and a month at Xmas the Jacksons would return to their home in Dorset leaving the staff to enjoy the premises with their families moving in. Wine and cigars would be left for the families to enjoy themselves while they looked after the house and grounds.

Pictured in the garden (view looking towards the Mill and Upton Park) is Housekeeper Nelly with the five Cairn Terriers.

The garden was large with the summer house and tennis courts. The Jacksons (Lady Jackson is believed to have been a lady in her own right - the couple probably married late in life and had no children) did alot of enertaining - the late Duchess of Westminster having been a guest.

Lady Jackson was in command of the A.T.S. in the NorthWest. When the General retired to Dorset at the outbreak of war it is believed that Lady Jackson transfered to a command in the SW. Lilian who had joined the ATS followed Lady Jackson down south and was stationed in Portland

This photograph shows a German prisoner-of-war engaged in work on the grounds.

see also Upton Lodge next door - also in military use for a period.