Built in 1775; Upton Mill was a full working flour mill with outhouses, yard and orchard stretching up to the boundary of the original Upton Park (no:84). It lost its sails in the early 1920s; presumably now powered by electricity. Many locals from the first half of the 20th century recall purchasing bread and cakes directly from them as a working bakery. It closed down becoming uninhabited in 1953. 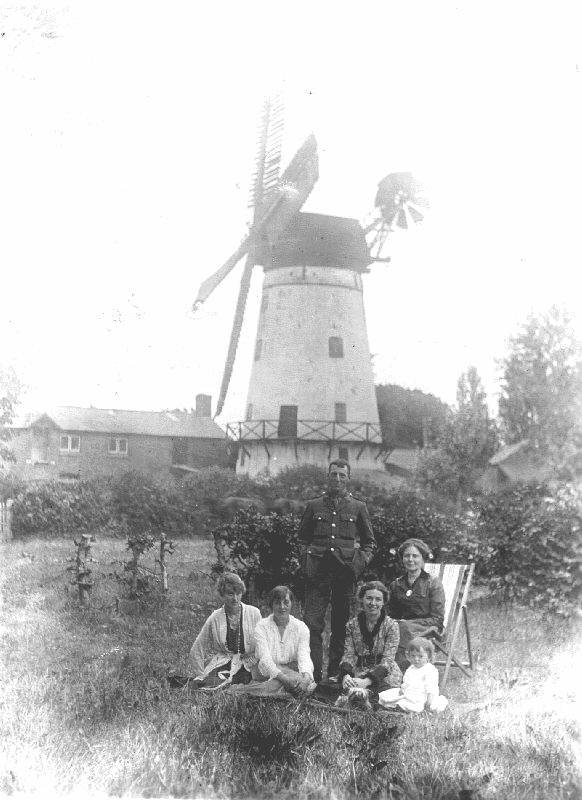 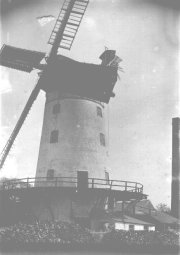 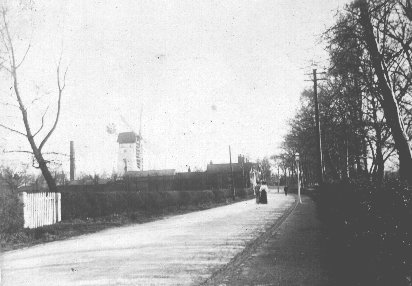 The mill around the time of WW1 viewed from approx looking south and looking east and from Mill Lane.

The projected site plan for Upton Park in the 1850s shows the mill and its yard having two gated entrances - one at each end of the lane passing through it.Only the base of the left pillar remains as does the Victorian letterbox

Clearly a major landmark at the time - it featured on a postacard of 1918. and sold many things including stamps before the village had its own postoffice. 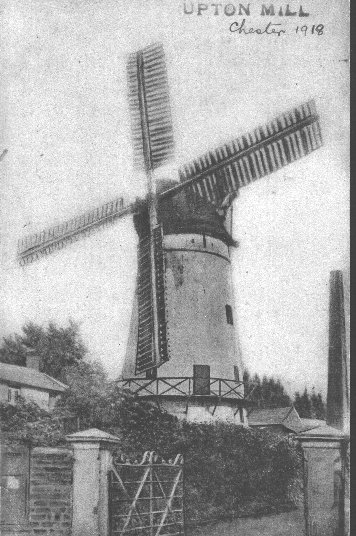 Reference to the OS maps shows significant expansion by the 1930s, behind the original mill buildings. This may have been part of their bakery expansion.

From being Dean's bakery they traded under the name of Country Maid Bakeries and were highly respected for their packaged sliced bread as a new innovation of the day. In 1954 it appears that they considered demolishing the mill as part of modernisation plans for the site and the business. The demolition of the disused shell of the mill was opposed by local residents. Eventually, they transfered their operation to Saltney, became part of Sunblest and what is now Allied Bakeries.

After the mill closure there were various proposals for its use but the only actual use that can be recalled was by T Houlbrook & Sons Wholesale Vegetable Merchants during the early 1960s. Their use prevoced considerable local concern with local MP - J M Temple - becoming involved. They moved out and soon demolition and clearance for housing was seen as the only solution.
The chimney - presumably for the ovens - was reputedly felled by the infamous Blaster Bates as part of the demolition process.

Upton Mill suffered a wartime incident when on 1 July 1941 a 2-seater Miles Master N7833 crashed into the outbuildings of The Mill killing the trainer and student. Both were French Canadians - Pilot Officer J M Milmine and Sargeant H A Womack both from 57 OTU at Harwarden

In 1979 the mill was put on the market as suitable for conversion to a private residence.
Bought and restored by Micheal Field for his own use the boundary wall was rebuilt with access from Old Mill Court. 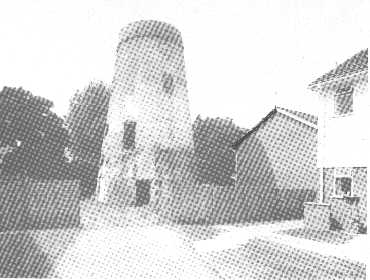 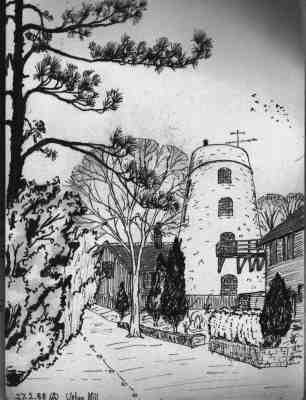 Upton Mill stands as one of Upton’s longest surviving buildings. Built in 1775, it has been threatened with demolition but now survives as a unique private residence. Originally surrounded by farmland, it was quite a landmark. On a map of Chester dated 1856, what is now Victoria Road was called Windmill Lane. Windmills were a fairly common sight on the landscape, there were several on the Wirral: Gayton, Bidston, Willaston and Higher Bebington for example. The Gibbet Mill near Saughall dates from about the same time.

Prior to the Windmill being built, grain was milled at the Bache Water Mill, but by 1816 this had stopped. The Mill consisted of cottages, outhouses, a yard and orchard, the mill itself being a tower mill. The round brick tower was topped with a wooden cap which held the sails and could turn so that the sails could face into the wind. At the back, a small set of fantail sails enabled the cap to turn should the wind change direction. It seems the mill was equipped with cloth sails but in 1901 they were replaced with the more familiar wooden louvred type by a Newark firm of millwrights.It is these that appear on old postcards and photographs of the Mill . Older residents of Upton Park have written of the working mill with ‘the sails revolving with a clanking noise’.

The earliest record of the Mill is the 1839 tithe map when the Mill, yard and outbuildings, including the mill house and garden, were owned by Samuel Brittain, a Chester solicitor, but were occupied by William Carter, the miller, who also had use of several of the fields in the parish of ‘Upton-on-the-hill’.. In 1857, William Carter had acquired ownership and was to sell a part of the grounds to create the Mill Lane entrance to Upton Park.

William Carter, aged 60, was recorded as miller, baker and farmer in the 1871/2 Census, along with his wife Elizabeth, aged 58, son-in-law Edward Dean (31) miller, daughter Elizabeth (31), grandson Edward (5) and Elizabeth Carter (68). The name Dean was to figure largely in the history of the Mill. Ten years later in the 1881 Census, Edward Dean now aged 42 was the farmer, baker and miller with five children: Edward junior (15), Joseph (11), Bessie (9), Helen (3) and one year old Charles. Two bakers are also listed, Henry Cain and Frederick Quinn, suggesting a flourishing bakery business at the Mill.

By 1891,the two eldest sons, Edward junior and Joseph had moved to a house in Upton Park. Edward Dean was now 52, and the list of workers and servants had changed entirely. In 1902, Edward (Ted) Dean junior was the owner/occupier of the Mill ( and Mill House), Edward Dean senior was a farmer at the Acres, and by 1914, Joseph Dean was farming too. Helen Dean lived at 19 Upton Park between 1920 and 1950.

It would appear the Mill’s sails were removed sometime in the 1920’s and gas was to power the bakery. In 1929, Edward Dean and Sons (Millers) Ltd. was a thriving business with a newly built bakery. 1934 saw Country Maid Bakeries, Upton Mill, (telephone 1318!) selling its innovatory wrapped sliced loaf on the premises. Many older residents recall the aroma of freshly baked bread. In the 1950’s, Miss Joyce Cook took a group of children from the Primary School to the bakery where they were met with the sight of a man holding a large pile of dough, thereby disproving the bakery’s proud boast…’untouched by human hand’!

Plans to develop and modernise the site envisaged the demolition of the Mill, an idea that was strongly opposed by Upton residents. By 1956, the business had moved to larger premises on Mold Road, Saltney and the buildings fell into a state of disrepair. In 1957 there was a proposed change of use to a shopfitting business and two years later the Mill was put up for sale. It was to be used by T. Houlbrook and Sons, wholesale vegetable merchants for storage purposes,(particularly local grown potatoes for Golden Wonder crisps). At about this time, the chimney of the bakery was demolished, reputedly by Blaster Bates. In the mid 1960’s, the site was becoming a safety hazard and subsequently part of the grounds were sold off for housing (nos.86-104 Upton Park}. This was followed by later developments into the 1970’s. In 1979, the Mill was put on the market for conversion into a private dwelling despite it being hemmed in by modern buildings and looking a sorry sight. It was little more than a derelict brick tower, its cap had long since been removed.

Over its two hundred year history, the Mill had seen many changes in its layout and use. Between the wars, a tennis court was built on its paddock for the use of the Ladies of Upton Park, and the Second World War saw air-raid shelters erected. On July 1, 1941, a two-seater Miles Master N7822 aeroplane crashed into the outbuildings, killing the trainer and student, both of whom were French Canadians from 57 OTU in Hawarden.

Today, the Mill has received a new lease of life as a five storey home through a sympathetic course of treatment. The metal windows , including some quaint strawberry gothic ones, have been retained and layers of old white paint have been sandblasted to reveal the mellow hues of the original brickwork. The wooden walkway has been restored and the whole blends into the landscape it once dominated. Appropriately, one of the newer roads nearby has been called ‘Dean’s Close’, recalling the family that once ruled the roost. So much so, Upton Mill was known locally as ‘Dean’s Mill’.